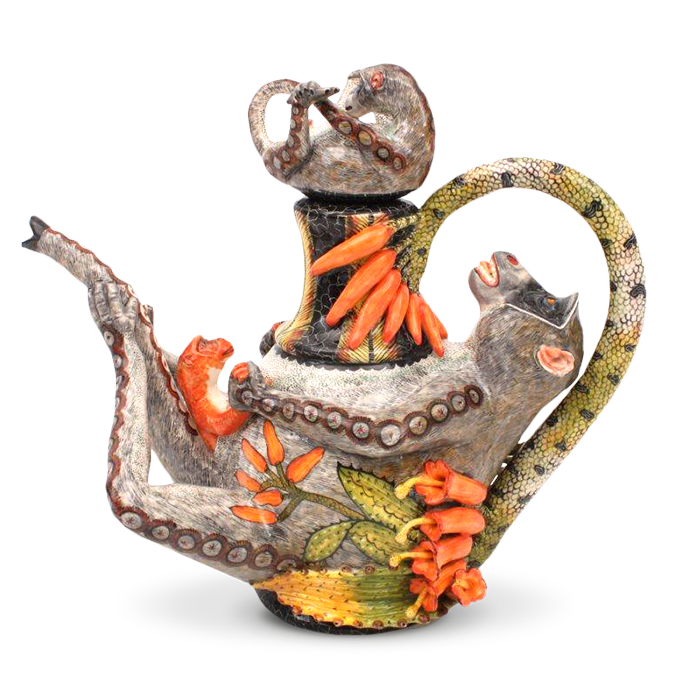 
Continuing our long association with Ardmore Ceramics, Charles Greig will be celebrating the Chinese Year of the Monkey by showcasing a curated collection of modern-day collectables, inspired by the form and antics of monkeys.

In the Chinese Zodiac, the monkey is portrayed as clever, lively and quick-witted.  He also has a mischievous streak and can be as wicked as he is wise.

Monkeys have always intrigued artists, and they feature in many great works of anthropomorphic literature and film. Take Mowgli’s abductors in ‘The Jungle Book’, or Kipling’s Quite the Wisest Animal in All South Africa, Baviaan. They reached their pinnacle of influence – in every sense – in the shape of Rafiki in Disney’s ‘The Lion King’. Simian and Simba, they stand together: wisdom and courage united.

Fée Halstead, founder of Ardmore Ceramics, and her daughter Megan have drawn on this rich heritage to assemble a delightful collection celebrating this most charismatic of animals.

Monkeys swing down from the trees to be elevated again as handcrafted artworks by the ceramicists of Ardmore. Each piece is alive with the joy and mischievousness of monkeys, as they alternately counsel and play pranks on their fellow creatures.

The shrewdness and dexterity of the monkey is perfectly captured in each charming trinket box, candlestick and teapot, while apes and japes come together in an oval centrepiece entitled ‘Pulling the Python’s Tail’.

Join Charles Greig in celebrating the Year of the Monkey with this exuberant collection from Ardmore.

This website uses cookies to improve your experience while you navigate through the website. Out of these, the cookies that are categorized as necessary are stored on your browser as they are essential for the working of basic functionalities of the website. We also use third-party cookies that help us analyze and understand how you use this website. These cookies will be stored in your browser only with your consent. You also have the option to opt-out of these cookies. But opting out of some of these cookies may affect your browsing experience.
Necessary Always Enabled
Necessary cookies are absolutely essential for the website to function properly. These cookies ensure basic functionalities and security features of the website, anonymously.
Functional
Functional cookies help to perform certain functionalities like sharing the content of the website on social media platforms, collect feedbacks, and other third-party features.
Performance
Performance cookies are used to understand and analyze the key performance indexes of the website which helps in delivering a better user experience for the visitors.
Analytics
Analytical cookies are used to understand how visitors interact with the website. These cookies help provide information on metrics the number of visitors, bounce rate, traffic source, etc.
Advertisement
Advertisement cookies are used to provide visitors with relevant ads and marketing campaigns. These cookies track visitors across websites and collect information to provide customized ads.
Others
Other uncategorized cookies are those that are being analyzed and have not been classified into a category as yet.
SAVE & ACCEPT